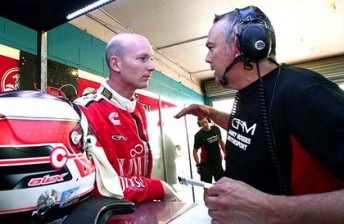 French V8 Supercars rookie Alexandre Premat has declared himself happy with his early progress in the Fujitsu Racing GRM Commodore at the Clipsal 500 Adelaide.

The former Audi sportscar and DTM driver finished Practice 2 as the eighth fastest of the 15 drivers allowed into the session, having improved more than 0.6s from his Practice 1 effort.

The 29-year-old has completed just two test days prior to this weekend’s opening championship event.

“I’m really happy about the car, about the track, everything is new for me,” said Premat.

“The car is running quite good. We need to adjust a few things in the rear because the traction is really bad, but we didn’t put fresh tyres on, so I think the lap time that I did was really good.

“We are looking forward definitely. I think it will be really hard this afternoon for the qualifying compared to the others because they know quite well the track, but it’s fine.

Premat has raced at some of the world’s most famous street circuits including Macau, Pau and Monaco, and says he’s enjoying the Adelaide venue.

“I love street circuits and Adelaide is fantastic,” said Premat.

“The first corner is quite good, it’s very fast going through the kerbs, and then after that in 4, 5, 6, it’s very tricky. It’s second gear and you really need to avoid snap oversteer otherwise you will go in the wall.

“After that, Turn 8 is pretty rough, but it’s nice, I really love it.”

The full V8 Supercars Championship field will hit the track for Practice 3 at 1210 local time.