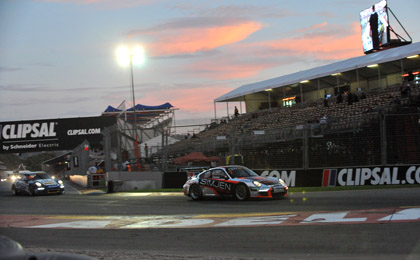 Alex Davison has secured a last lap victory over in the opening race of the 2012 Porsche City Index Carrera Cup.

At the start, pole-sitter Davison was beaten into turn one by reigning champion Baird and pressured the Kiwi over the entire 30 minute twilight race.

The race came to a head in the closing stages when Baird suffered a puncture on the final lap, likely to have come from a small brush of panels between the pair.

After leading for more than 29 minutes of the race, Baird ended up crossing the line in seventh place.

“We had a great run in qualifying, We got got jibbed in qualifying, starting on the right hand side of the grid, but that is just one of the quirks of this track.

“Craig drove away and I thought I was gone. I caught back up and I was stronger than him in some parts of the track and he was stronger in others. I had a lunge and we had contact and it looks like he has cut a tyre from that.”

Behind Davison was Nick Foster in only his second-ever Carrera Cup race, beating Daniel Gaunt.

Two-time Bathurst 1000 winner Steve Richards qualified third and ran close behind leaders Davison and Baird for the opening 10 laps until a suspension issue halted his progress.

The second of three Carrera Cup race will be held tomorrow at 9.40am.