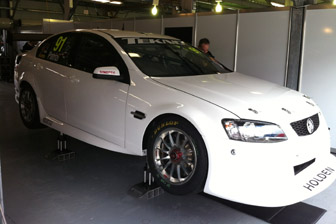 Tekno Autosports’ two Holden Commodore VEs will compete with a plain white look for the opening event of the V8 Supercars Championship at the Clipsal 500 Adelaide this weekend.

The team’s two Commodores, to be driven by team owner Jonathon Webb and new driver Michael Patrizi, have failed to secure a major partner, and have made the decision to run without a colour scheme on its Triple Eight-built cars.

Minor signage for Patrizi’s backers Sinopec, Onsite Rental Group and Ausdrill is displayed on the cars, in addition to modest Holden branding.

The move to campaign plain looking cars has not been looked on favourably by V8 Supercars, but Tekno Autosport’s commercial manager Paul Robinson says that the team is biding its time until a major partner is secured.

“It’s not ideal, but we want to sit tight and wait for the right parnter,” Robinson told Speedcafe.com in Adelaide. The rear of Michael Patrizi's Commodore

“There has been a couple of offers, but it is not where we want to be. We are looking for a partner that is the right fit for us, and we are preapred to wait, but we hope to have something locked away soon.

“We have a few irons in the fire and hopefully we can lock something down.”

Robinson confirmed the cars will not have any branding on them at this weekend’s race.

“Definitely white this weekend, again, it’s not ideal, but that’s the decision we made,” he said.

“Hopefully that gets noticed, we’re up the front and the phone starts ringing.”

The V8 Supercars hit the circuit tomorrow for practice, qualifying and the top 10 shootout.