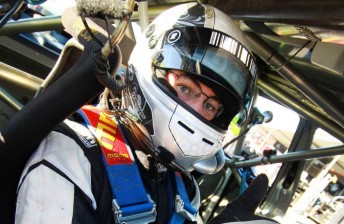 Taz Douglas has stepped up to the V8 Supercars Championship this year with Lucas Dumbrell Motorsport, after spending serveral seasons running his own entry in the V8 Supercars Development Series.

On the eve of the season opening Clipsal 500 Adelaide, Speedcafe.com’s Grant Rowley spoke with Douglas about his new program.

SPEEDCAFE: Usually at this point of the race weekend, you are fitting tyres to wheels, putting panels on your car or fuelling up. This is a little bit different for you …

TAZ DOUGLAS: It is fairly different to what I’m used to. For other drivers who come in here, they are a little more used to just driving. For me, it’s like being in a foreign county – I’m here on a Thursday, I’m not going out on the track today, I’m not working on my car, I’m not unpacking the truck, I’m not doing the set-up. I really don’t know what to do with myself! I’m relieved that I’m not over in the DVS paddock, because I’ve heard it’s under water (due to rain on Wednesday)! It’s a lot different, but I’m enjoying it.

SPEEDCAFE: Do you think you’ll be able to adjust to being more hands off?

DOUGLAS: I will over time. This morning, I had to think before I got dressed. I had to put jeans on, do my hair and make sure I’m looking OK. Usually, I’d wack a hat on with work clothes because I’d be hoping under cars! It will take a little to get used to.

I’m still at the workshop (between events), doing things on the car, watching what’s going on because I’m so used to be so involved in how everything is coming together. I have to try and step back, concentrate on my driving, which is something I haven’t been able to do.

SPEEDCAFE: You’ve had one drive of the car. How much different is this Triple Eight car compared to the other V8s you’ve driven in the past?

DOUGLAS: The Sandown test went well. On hard tyres, I think we were quite fast. On the soft tyre, obviously I’d never driven on them before, but that will come with time.

The car itself is unbelievable. It is a massive step for me, especially coming from a seven-year old Perkins-built Commodore VE, coming to be of the best race cars in the field. Everything from braking, turning, corner speed is just head and shoulders above anything I’ve driven. I did a time that was two seconds faster than my old rig. You can’t fault the car. It’s unbelievable and let’s hope I can do it justice.

SPEEDCAFE: And what is justice? What are your expectations?

DOUGLAS: I don’t know, I don’t really have any expectations. It’s so tough out there. All the drivers are good, there’re no dills out there, so you have to be right on top of things.

If I’m around the ’20 mark,’ I’ll be happy with that for the year. I’m sure they’ll be rounds where we’ll be last and we’ll be scratching our heads, but I’m sure there are rounds where we surprise ourselves and maybe be a little bit further up the grid. I’m under no illusion that I have a lot to learn.

It has been hard for me in the development series to prove anything with the equipment I have. I’ll just do the best I can, and if it’s good enough, great, and if not, then maybe I shouldn’t be here!

SPEEDCAFE: The big difference you’re likely to encounter is the length of the races – and this weekend Clipsal 500 will be the toughest of all …

DOUGLAS: We did a couple of long runs at Sandown so I could fiddle with bars and biases as the tyres go off and the fuel load lightens. We were going to do a lot more at Winton, but we didn’t get out because of the rain.

All that sort of stuff is everything I have to learn when I get to the Main Series. At the end of the day, I might be able to belt out one lap time, but I’ll have to learn how to put it together over 250km, make tyres last, do good out laps and in laps. It will take time, but everyone has been in my boat.

Clipsal will be a tough race, but I’ve done everything I can. I’ve been putting in hard in training.