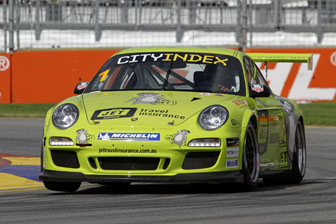 Behind the leading duo in the times were Daniel Gaunt, Steven Richards, Nick Foster, Tom Tweedie and Matt Kingsley, while James Koundouris held the eighth quickest time and the best of the Elite Class drivers.

Baird posted his fastest lap on his final lap of the day, pipping Davison at the top of the timesheets. However, Davison believes there is more pace to come.

“In order to improve I had to continue to adapt to the car today,” Davison said.

“I held a steady pace in the first session in order to get my technique right and I made a big improvement in the second session. Baird just pipped us on the final lap but there’s still some time to gain; I didn’t get my best sectors together and was still playing with my driving style, trying to find out what works best.”

Foster was the only Carrera Cup driver to be involved in an incident after his throttle stuck open at Turn 5 in the first practice session. His car was repaired for session two.

Qualifying for Carrera Cup will be held 12.55pm tomorrow, followed by a 7.45pm evening race.

In Australian GT, Allan Simonsen took the Ferrari 458 to the top of the times in the second practice session. The Dane will co-drive with Peter Edwards. In the first GT practice session, Tony Quinn endured a big accident in his Ferrari. CLICK HERE for more.

The Clipsal 500 organisers released a crowd figure today of 40,700.

The V8 Supercars Championship cars will hit the track tomorrow with four practice sessions, qualifying and the top 10 shootout.