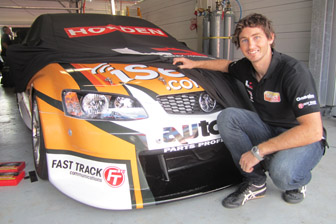 Taz Douglas has given Speedcafe.com readers a brief look at his new Commodore VE

Lucas Dumbrell Motorsport has given Speedcafe.com readers a sneak peek at it’s iSelect-backed Holden Commodore VE that Taz Douglas will drive in the 2012 V8 Supercars Championship.

LDM is now in its third year in the sport and will start the season with a new car – a Triple Eight Commodore VE raced last year by Russell Ingall.

The car will be supported by iSelect.com.au, Holden, Autopro and NGK.

The Commodore VE is majority orange with white and black.

The complete livery will be released later today.