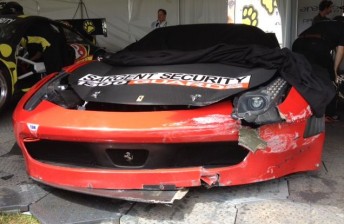 Tony Quinn’s has withdrawn his brand new Ferrari 458 GT3 from this weekend’s Australian GT Championship season opener at the Clipsal 500 after a crash in practice today.

Quinn, who is also the owner of the AGTC, lost control of his Ferrari exiting Turn 9 in first practice and spun into the  wall – damaging both ends of the Italian car.

“I was just starting to get comfortable in the car but got it up on a kerb and away she went,” said Quinn.

“I’m pretty disappointed with myself really, it was a simple spin but you don’t get second chances on a street circuit like this.”

While the car only received minor damage in the incident, Quinn says that it was a botched trackside recovery that has ruled it out for the weekend.

“I nearly cried when I saw them pulling it around to align it with the tray” said Quinn.

“It has torn welds on the chassis in an area that was not damaged in the accident and this type of damage cannot be repaired at the circuit.

Simonsen, who set a new outright lap record at Bathurst last weekend in the Armor All 12 Hour, is again teaming up with car owner Peter Edwards in Adelaide.

Five of the 24 entrants are running co-drivers, with Warren Luff (in Mark Eddy’s Audi R8 LMS) and Paul Stokell (in Darren Berry’s Ginetta G50) the other notables.

Simonsen, Luff and Paul Morris (Aston Martin DBRS9) are the only ‘seeded drivers’ in the field.

Tony Quinn meanwhile was one of five entrants running Pirelli tyres under the category’s new open tyre regulations. The remainder of the field has continued with previous control tyre supplier Michelin, which has welcomed its new found competition.