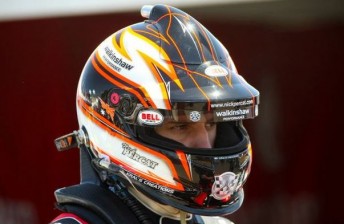 Walkinshaw Racing’s Nick Percat has ended the opening day of the 2012 Dunlop Series on top of the time sheets.

Percat, who enters his third season in the V8 Supercars Development Series this year, also topped the morning’s opening session.

Tim Blanchard was third fastest for the day in his Matthew White Motorsport prepared ex-Ford Performance Racing Falcon, having sat atop the Practice 2 times with just five minutes remaining. 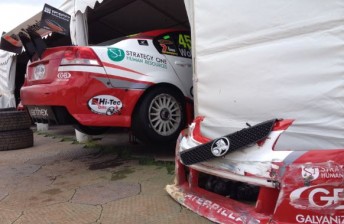 Dale Wood's Commodore spent most of the day in its garage

In even more trouble was Dale Wood, who failed to take to the track in the second session after crashing in the early laps of the morning session.

Wood lost control of his Greg Murphy Racing Holden in the Senna Chicane before making head-on contact with the right-hand side tyre wall on the exit.

It is expected that the team, which is being headed by two-time V8 Supercars Championship winning engineer Paul Forgie this weekend, will have the #45 Commodore repaired in time for qualifying tomorrow morning.

See below for the combined times from Practice 1 and 2