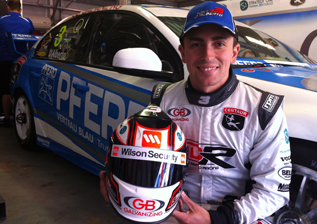 Tony D'Alberto with his new helmet

Tony D’Alberto has secured a personal deal with Wilson Security for the 2012 V8 Supercars Championship.

The 25-year-old Victorian will sport branding from the security company on his new helmet, which also features backing from his other personal sponsors GB Galvanizing and Strategy One.

While his race car may not have Wilson support this year, D’Alberto is pleased to have continued a personal deal.

“It’s good to have that continuity with Wilson,” D’Alberto said.

“We had a big deal with them last year, and although it hasn’t turned out that way this year, it’s important for myself to see that continue.”

For those at the Clipsal 500 Adelaide race circuit this weekend, it will be hard to miss the Wilson Security branding across most of the categories. The company will support Wall and Reindler in the V8 Supercars Championship, Dale Wood (Dunlop Series), Daniel Gaunt (Carrera Cup), John Bowe’s Touring Car Masters Mustang, as well as the Touring Car Masters category itself.