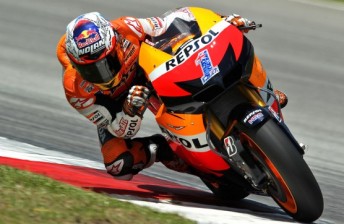 Casey Stoner quickest on a steamy day in Malaysian testing

Australia’s Casey Stoner has topped team-mate Dani Pedrosa on the timesheets of the opening day of pre-season testing in Malaysia.

The first day of the second pre-season meeting at Sepang International Circuit wrapped up with the Repsol Honda rider setting the fastest lap set in the morning session of 2:01.761, as heavy rain at the mid way washed out much of the afternoon’s testing.

Riders commented that high track temperatures (40C) and slippery track conditions in the morning reduced the pace from the first Test in Sepang a month ago.

Stoner, who became a father for the first time earlier this month, ended his day after just 16 laps, while team-mate Pedrosa ventured out after the weather cleared to continue working to find a better position on the RC213V. The Spaniard was happy to finish the day having found improvements that allow him to better handle the heavier 1000cc bike under braking.

“The first day of testing has gone well, we started off where we left last time but the track conditions have been a little worse,” said Stoner.

“We have a some work to do, this morning we managed to compare a few things back to back, we’ve tried a new set of brake disks to try and reduce the brake fade that I’ve been having at the last test so that’s been an improvement.

“We’re trying a few other things with set up, to shorten the wheelbase and get a little more traction. We have a couple of things we can try to change the stiffness and also move the weight around a little bit to try and upset the chatter and reduce the frequency.

“This afternoon I have no doubt we would have gone a second or a second and a half faster, but the rain came out and the track didn’t dry up enough to warrant going out so we’ll wait until tomorrow.”

Yamaha Factory riders Jorge Lorenzo and Ben Spies completed the day third and fourth fastest, with Lorenzo testing a new engine though the slippery track in the morning and rain in the afternoon prohibited testing its full potential.

Alvaro Bautista completed 24 laps to end the day with his best time of 2:02.959 placing him in fifth position. The San Carlo Honda Gresini rider is taking advantage of the test to work on riding position and geometry as he continues to adapt his riding style to the 1000cc machine.

Returning from surgery just three weeks ago, Nicky Hayden closed out the day in sixth place with a time of 2:03.132.

With water still on the track, Ducati team-mate Valentino Rossi was the first to return to the asphalt, donning wet tyres and continuing to work on GP12 electronic package, traction, and corner exit acceleration. His best lap from the morning of 2:03.245 placed the Italian eighth for the day.

Monster Yamaha Tech 3’s Cal Crutchlow and Andrea Dovizioso concluded the day in seventh and 11th positions, respectively. The Italian rider struggled with a rear brake issue as he continues to adjust his riding position to fit the Yamaha.

Héctor Barberá (Pramac Racing) and Stefan Bradl (LCR Honda) finished ninth and tenth, with newcomer Bradl feeling confident with his progress on the premier class bike as he continues to work on the Honda’s electronics.

Karel Abraham (Cardion AB Motoracing) withdrew from the test after shoulder and back injuries from a crash at Jerez last week proved too painful to allow the Czech rider to continue.

Check out the Foxsports News report from the test