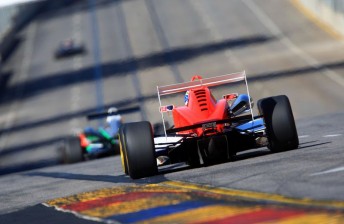 The field has been set for the opening round of the 2012 Formula 3 Australian Drivers’ Championship at this weekend’s Clipsal 500 Adelaide.

R-Tek will also run its two F304 model Dallaras in the National Class (for Chris Slusarski and a yet-to-be-named second driver), competing against single-car efforts for Ben Gersekowski and Hayden Cooper.

The category had been expecting 15 cars for the event, before late withdrawals from potential Forpark Scholarship Class contender Lockie Marshall (due to a broken wrist), Queenslander Jon Mills (due to a family medical situation) and new team Harvest Motorsport (due to customs delays while importing its Mygale chassis).

Although the Formula 3 field will be the smallest of the seven support classes in Adelaide, category manager Richard Craill says that the entry provides a strong foundation for the remainder of the season.

“The numbers are obviously what they are,” Craill told Speedcafe.com.

“It’s a building process and from where we have been in the last two years, 12 is a good start but we’re working incredibly hard to grow it further and the progress is there. Six months ago we had six cars at Sandown and people were writing us off.

“There are three cars that should be racing this weekend that have been forced out by the strangest of circumstances – injury, sickness and even Australian Customs, so we know the cars are there and will be out, if not at round two, then at Bathurst in April. It’s just one of those things out of our control and they would be there if they could.

“If you add those cars to our Clipsal count then we are at 14 to 16 cars and that’s right where we need to be and somewhere around where we should balance out for the remainder of the season.”