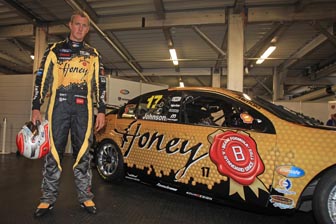 The #12 entry, to be driven to Dean Fiore, will compete in the bourbon company’s ‘Devil’s Cut’ brand, while Steven Johnson’s #17 Falcon displays the hues of the recently launched ‘Jim Beam Honey’ product.

The cars were launched in the team’s pit garage for this weekend’s season opening Clipsal 500 Adelaide.

Johnson heads into the Clipsal 500 fresh from competing in last weekend’s Armor All Bathurst 12 Hour, where he finished fourth outright in a Class B Porsche 911 GT3 Cup Car.

This season marks Johnson’s 13th as a full-time driver with the famous squad. Fiore has brought his own Triple Eight Race Engineering-built Ford Falcon FG to the squad, and continues to compete under his own Racing Entitlements Contract.

Dick Johnson Racing has expanded to four cars for this season, with Steve Owen (VIP Petfoods) and James Moffat (Norton) also competing with the team.

The 2012 V8 Supercars Championship kicks off this Friday with the Clipsal 500 Adelaide.

See below for Speedcafe.com’s exclusive video on this evening’s launch