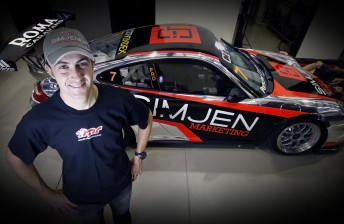 Alex Davison will be out to re-establish his credentials from this weekend when he lines up in the opening round of the Porsche City Index Carrera Cup at the Clipsal 500 meeting.

After three years driving the IRWIN Tools Ford at Stone Brothers Racing, Davison was replaced by Lee Holdsworth and in the Merry Go Round of drivers swaps he missed out on a seat in the V8 Supercar Championship.

While Baird is considered the world’s most successful Porsche one-make series racer, Davison has Porsche credentials to match. The 2004 Carrera Cup Australia champion, Davison has experience in Porsche Carrera Cup Deutschland and a season in the first tier Porsche Mobil 1 Supercup, which included one race win and was a Porsche Works driver prior to his most recent stint in V8 Supercars.

“I think I’m a strong chance for a shot at the title this year. I’ve done enough Porsche racing in the past to be battling for race wins immediately at the Clipsal 500,” said Davison.

“After racing V8 Supercars full-time, I’ve had to adjust my driving style to suit the Porsche; however I’ve spent plenty of time at the wheel of Porsche race cars in my career so I’ll quickly adapt to the style required.”

“For me, racing in V8 Supercars full-time wasn’t an option in 2012 and it was important to be racing full-time this year. Carrera Cup offers sponsors great exposure and, if I wasn’t driving V8 Supercars, I wanted to be driving something enjoyable.”

Young guns Nick Foster, Tom Tweedie and 16-year-old Kiwi sensation Andre Heimgartner will also all look to challenge their more experienced rivals at the front of the Porsche field.

Porsche GT3 Cup Challenge Australia front-runner Matt Kingsley has stepped up into the category from the Porsche ‘feeder series’, with the 2009 GT3 Cup Challenge champion racing Ray Angus’s Porsche at the Adelaide event.

After claiming the top three positions in the 2011 Elite Class standings, Max Twigg, Paul Kelly and James Koundouris will all return this weekend to begin their 2012 Carrera Cup campaigns.

“I’m looking forward to seeing how I measure up against some of the drivers in Carrera Cup,” said Bates.

“The Elite Class drivers like Max Twigg will all be tough competition so I’m really looking forward to competing against them at the Clipsal 500.”

The Porsche City Index Carrera Cup Australia hits the track from Thursday for practice. Friday includes qualifying and the opening evening race which is set to start at 7.45pm local time. Crews are back on track for race #2 on Saturday morning at 9.40am, with the final race telecast LIVE on Seven on Sunday afternoon from 1.20pm (local time).