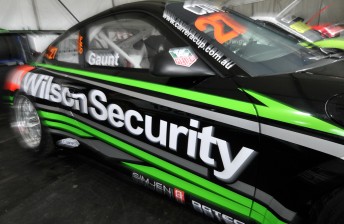 The Kiwi has moved from the Melbourne Performance Centre team to Rusty French’s Skye Sands squad for 2012, having finished third in points last year.

“I’m truly excited to bring Wilson Security to the championship for the Clipsal 500,” said Gaunt.

“Wilson Security have a strong presence in V8 Supercars and it’s great for the company to look to Carrera Cup to expand its sponsorship involvement.

“I hope this year will bring some great results for me and the team. It’s going to be tough, with the likes of Craig Baird, Steven Richards and Alex Davison in my mirrors, but I think we’ll be a good shot at race wins, starting from this weekend.”