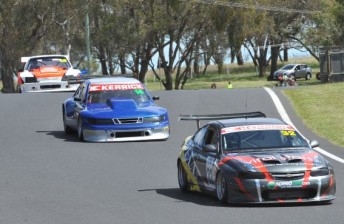 Expect an even bigger field of Sports Sedans to head to Mount Panorama next year, following the category’s first outing at the venue in almost 20 years as part of the weekend’s Armor All Bathurst 12 Hour event.

A total of 29 cars hit the track for the New South Wales Sports Sedan Association promoted races, where pre-event fears that the cars would be too fast for the undulating 6.21km venue proved unfounded.

While the leading cars from the national series did not attend, the event attracted entries from four states, including the cream of the NSW and Victorian state fields.

Three different drivers won races , with Victorian Michael Robinson taking out the finale after a steward’s hearing deemed that Race 2 winner Stuart Inwood had taken the lead under yellow flags.

Robinson later told Speedcafe.com that the smooth running of this year’s races should enable the class to return to Bathurst with even stronger fields in future.

“On Monday morning alone I had 10 phone calls from other guys with cars that weren’t there talking about doing it next year,” said Robinson.

“As a class we proved that our cars could handle the circuit and our drivers could behave themselves.

“We discussed in the drivers’ briefing that we weren’t playing for sheep stations and that everyone should just enjoy themselves, and that’s what we did.

“It’s the experience of a lifetime for us racing around that track in our cars. I’d race at Bathurst before in a Nissan 200SX, but it was completely different in the Sports Sedan.”

Robinson is one of at least 15 competitors set to line-up for the full Kerrick Australian Sports Sedan Series this season.

After just five competitors entered every round in 2011, the category has put together a competitor contract that sees those committing to the full season benefit from category sponsorship and supplier deals.

The first of five rounds on the 2012 calendar will take place at Mallala as a part of the Shannons Nationals presented by Hi-Tec Oils event at the South Australian circuit in mid-April.