Neal Bates turns back the clock

Neal Bates turns back the clock 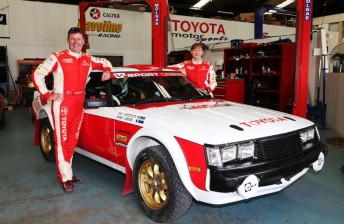 Neal Bates and Coral taylor with their new 'old' Toyota

Four-time Australian rally champion Neal Bates will return to competition this week driving a fully-restored 1980 Toyota Celica RA40 at the opening round of the BOSCH Australian Rally Championship in Melbourne.

Bates, who completed testing over the weekend, has spent the past 18 months building the iconic Celica from a bare shell and will debut it at the Rally Calder presented by East Coast Bullbars, which begins on Thursday March 1.

The car is a replica of the model the late Ove Andersson and Henry Liddon drove in the World Rally Championship during the early 1980s.

Bates will compete in the series alongside successful long-time co-driver Coral Taylor.

Bates said his fascination with Toyota motorsport history and a love of the RA40 model led him to taking on the project.

“Since I saw a photo in a magazine of Ove Andersson and Henry Liddon driving the RA40 at the 1980 Acropolis Rally I was inspired to find one to enter in the ARC,” said Bates.

“We bought the car on eBay for a few hundred dollars, stripped it back to a bare shell and then built it from scratch.

“I’m very proud of how it turned out – it looks very pretty and the guys did an absolutely superb job.”

The car is fitted with 2012-spec safety features including full roll cage, seats and harnesses, as well as new suspension, engine and gearbox.

“We put the car through a shakedown test last weekend and it ran really well,” Taylor said.

“We are very excited and looking forward to getting back to competition, especially with such a beautifully prepared car that pays homage to Toyota’s proud rallying history.”

Bates and Taylor will compete in the 2012 Australian Classic Rally Challenge, an expansion of the invitational classic section that has run as part of the ARC since 2009 for pre-1986 rally cars.

The classic rally cars will run before the main competitors at each of the six 2012 Australian Rally Championship events and compete for points that go towards a dedicated series points tally.

Check out the sight and sound of Bates’ Celica