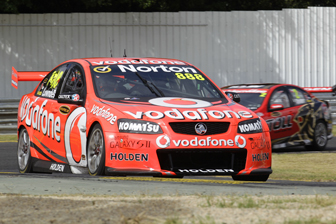 Holden has announced an extension of its deals with its leading V8 Supercars teams Walkinshaw Racing and Triple Eight Racing Engineering.

In what is being described as “multi-year” deals, the Toll Holden Racing Team, run by Walkinshaw Racing, and the multiple-championship winning TeamVodafone, will continue in Holden Commodores in the coming years.

Combined, the HRT/Walkinshaw and TeamVodafone operations have won 11 of the past 16 Australian Touring Car/V8 Supercar Championships, and the last 11 straight Bathurst 1000s.

The news is significant, given that V8 Supercars has ‘open the shopfront’ to other manufactures under its new Car of the Future regulations that will be enforced from next year.

Nissan has already made its announcement to come into the sport, linking with current Holden team Kelly Racing.

Holden’s sponsorship manager Simon McNamara says that by signing up two of V8 Supercars’ best teams will ensure that Holden comes out on top when the new regulations are introduced.

“Holden has supported the top level of Australian touring cars for over 40 years and we are proud of our racing history and the role it plays in our brand – motorsport is an important part of Holden’s DNA,” McNamara said.

“Holden has been tested many times as series regulations have evolved throughout the years, and we have met each one with success.

“V8 Supercars’ Car of the Future in 2013 is no different. Today’s announcement makes a clear statement that Holden is ready to meet the COTF challenge head on.

“With the Holden Racing Team and TeamVodafone, we have the two very best teams, four championship-winning drivers, and the finest race engineering capabilities – Holden is better prepared than ever before.”

The 2012 V8 Supercars Championship gets underway this weekend at the Clipsal 500, Adelaide.