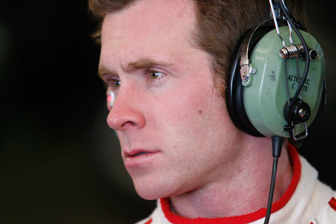 Dale Wood will make a return to the Dunlop Series this year, competing with Greg Murphy Racing.

Wood, who will team up with Tony D’Alberto in the V8 Supercars endurance races later this year, will be part of an all-new GMR driver line-up which includes regular team driver Geoff Emery and Development Series regular Marcus Zukanovic.

Zukanovic has contested the past five seasons in his sel-prepared entries, but will switch to the experience of GMR for 2012.

Zukanovic will drive the team’s newest car, last raced by Daniel Jilesen, while Wood will steer the chassis that Steve Owen won the 2009 Development V8 Series in. Emery will remain in his own car that he has competed in for the past two years.

Wood’s entry will be supported by GB Galvanizing, Wilson Technologies and Hi-Tec Oils.

Wood is no stranger to GMR, having raced with them for two seasons between 2007 and 2008 and is looking forward to linking with the Victorian team again.

“The first two years I drove with them was my during my introduction years, so it’s good to go back there” Wood told Speedcafe.com.

“I’ve always maintained a good relationship and it’s exciting to be back with Murphy’s team in a competitive car.

“It has been a long time since I’ve driven one of their cars. It would have been nice to do a test day, so we’ll go to Clipsal pretty fresh. We all know who the competition we’ll be up against, so it will be tough, but if you do well, you get noticed.

“And it ties in very well with my endurance drive with the D’Albertos. Getting race miles under my belt for Sandown and Bathurst will be extremely handy.”

Wood’s commercial backing will be confirmed in the coming week.

Team owner Kevin Murphy believe he has “a strong line-up” for the 2012 Dunlop Series.

“Marcus has shown a lot of promise over the last few years, and we’re hoping that a change of environment will give him a big lift and get him running at the front,” Murphy said.

“We’ve run Dale’s car in the past, so we know him quite well, we know what he’s able to achieve of and he is a very strong addition for the team. He is more than capable of running at the front.

“Geoff has ben with us for the past couple of years. He has a new engineer this year, so we’re hoping that change will help consolidate his position. He has a lot of potential. He’s been doing the V8 SuperTourer stuff as well so that won’t do him any harm.”

GMR is hoping to have a fourth car ready for the second round of the series at Barbagallo Raceway.

The renamed Dunlop Series will kick off at the Clipsal 500, Adelaide on March 1-4.