Rain delay for Ambrose at Daytona

Rain delay for Ambrose at Daytona 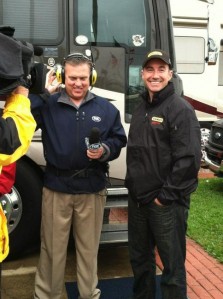 Ambrose with Foxsports' Steve Byrnes during the rain delay at Daytona

Marcos Ambrose and 42 other drivers in this year’s Daytona 500 are yet to take to the track for the ‘Great American Race’ because of rain.

NASCAR does not race in the rain on speedways, and apart from running rain tyres on road courses in Montreal and many years ago in Japan, it doesn’t even have grooved rubber in the pit area for the premier Sprint Cup Series.

Ten jet dryers, plus other vehicles, are now on the track clearing the surface water. It is expected this will take at least 90-minutes to have the 2.5-mile track ready for racing. Under NASCAR rules at least 100 laps (half distance) has to be run to be able to declare a result.

Fortunately Daytona is well equipped to run into the evening with an extensive lighting system. However, persistent showers have meant that NASCAR can’t even put an estimated start time on the race.

The race could be postponed until tomorrow. That could be good news for Ambrose, as the last time a race was delayed a day was Watkins Glen last year when the Tasmanian scored his first NASCAR Sprint Cup victory.

“The weather looks a little brighter and it appears we will get the race in today,” said Ambrose.

“We have had plenty of speed and we just need to maximise it and turn it into a result.

“These races are tough and all the drivers will tell you that all the plans and theory going into the race sometimes doesn’t count. You have just got to go off instinct when you get out there.”

Once the race is underway, Speedcafe.com will have extensive coverage.