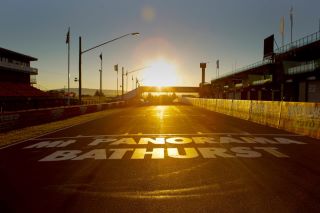 The 2012 Armor All Bathurst 12 Hour is underway at Mount Panorama, with Christopher Mies and Allan Simonsen battling for the lead over the opening laps.

The benchmark was subsequently lowered further by Simonsen, whose times varied from 2:08s down to 2:06s across the opening hour depending on traffic.

“We knew the car was quick, and the cold track temperature is really good for quick lap times,” said John Bowe, who will co-drive the Maranello car alongside Simonsen, Dominik Farnbacher and Peter Edwards.

“But it doesn’t really matter how fast you can go, it’s a 12 Hour race and we need to be there at the end.”

The outright Bathurst lap record had been held by V8 Supercars drivers since 2002.

Behind the leading trio, Warren Luff (#2 Phoenix Racing Audi) made his way around Craig Baird (#33 Clearwater Ferrari) in the early laps. The Malaysian 458 is carrying a 50kg weight penalty after breaking the 2:08.0s minumum practice and qualifying lap time yesterday.

A total of 25 cars started the race, following a qualifying crash from Ted Huglin that saw the #4 Consolidated Chemicals Lamborghini withdrawn yesterday.

Qualifying ended with the #1 Phoenix Racing Audi edging out the #17 Maranello Motorsport Ferrari.

Stick with Speedcafe.com for updates from Mount Panorama throughout the day.