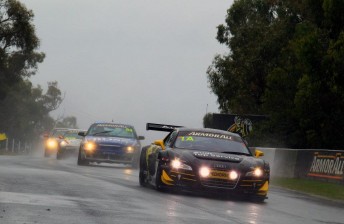 Mies was leading the race during the seventh hour when he rotated the #1 Phoenix Racing entry into the Murray’s Corner gravel trap.

The 22-year-old was fortunate that a Safety Car intervention and quick response from track side marshals freed the car before it went a lap down, allowing co-driver Darryl O’Young to charge back into the lead of the race within half an hour of the incident.

As Mies had completed four of the race’s first six hours, O’Young and Christer Joens were charged with taking the car home to the victory.

“When it was wet we were the fastest car on track, but then I made a mistake and spun at the last corner,” said Mies after the race.

“We think that the brake discs were too cold because of all the water and I spun. I hit the wall also, but it was only light so there was no damage and we could continue.

“After that Daryl was able to get the car back in front, but it wasn’t as easy as it looked because the Mercedes, Ferraris and Lamborghini were quick. Both Ferraris were always just behind so it wasn’t easy for us.

“In the end I think it was amazing for Daryl and I to get our second victory, and also for Christer driving here for the first time in those super wet conditions.”

Jeroen Bleekelmolen finished just over a minute adrift of the victory in the #20 Erebus Racing Mercedes, and later joked at just how close to disaster Mies had come.

“I think those Audi boys should buy all the beers for the guys on the last corner, because to go off like that and not lose a lap was very lucky,” smiled Bleekemolen.

“On the other hand they did a great job. They had a very good car and their drivers did very well, so in the end we were just a little bit short.

“That’s the way it is. I think we can be happy with the job we did. We made no mistakes and I think this is the maximum we could do.”