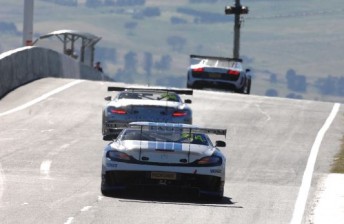 The #2 Audi leads the #20 Mercedes across the top

The #2 Phoenix Racing Audi leads the 2012 Armor All Bathurst 12 Hour after a frantic opening three hours.

Allan Simonsen set the pace in the opening hour aboard the #17 Maranello Motorsport Ferrari, having made his way around the Christopher Mies driven pole-sitting #1 Phoenix Racing Audi in the opening laps.

The Ferrari eventually struck drama at the end of the hour, losing significant time when it ran out of fuel.

The race took another turn at the end of the second hour, when the #14 Red Camel Seat stopped on Conrod Straight – bringing out the Safety Car for the first time.

The yellow flag intervention came in the middle of the second round of stops, while a subsequent downpour led to a chaotic restart.

Roger Lago had sat fifth on the restart in the #23 JBS Lamborghini after a slow second pitstop, before a spin at Forrest Elbow saw the Italian car drop a lap.

Nathan Tinkler was also a victim of the slippery conditions, and was lucky to avoid the concrete walls when spinning the Class B leading #3 Tinkler Motorsports Porsche at Griffins Bend.Steven Johnson soon took over from Tinkler, ensuring the car still led its class at the end of the hour.

A second Safety Car was required during the hour when Frank Yu crashed the #22 United Autosports Audi heavily at Griffins.

The Phoenix Racing Audis both pitted before the end of the third hour, but found themselves in again soon after due to the third Safety Car being triggered by a crash from the Sean Patrick Breslin-driven #21 Black Falcon Mercedes at Reid Park. The German entry had lost significant time earlier in the race with a broken rear suspension bolt.

The five leading cars pitted immediately after the Safety Car intervention, with the #2 Audi jumping the #20 Mercedes in the process. The stops ensured that the #17 Ferrari and #23 Lamborghini teams were both able to move back onto the lead lap.

See below for the top five after Hour 3