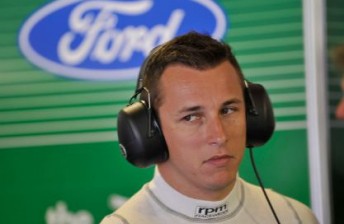 Austrian ex-Formula One driver Christian Klien remains focussed on a future in sportscar racing, despite currently being without a drive for the 2012 season.

The 29-year-old is racing in today’s Armor All Bathurst 12 Hour in Rob Thompson’s Lotus Exige, having met the Queenslander at last year’s Nurburgring 24 Hour.

While Klien’s appearance at Bathurst follows a drive in last year’s Armor All Gold Coast 600, the Austrian says he has not spoken with any V8 Supercars teams about this year’s Sandown, Bathurst or Gold Coast endurance races.

Klien is currently without a full-time drive following the exit of Aston Martin (for which he drove in 2011) and Peugeot from prototype sportscar racing.

Describing a full-time move to V8 Supercars as “definitely an option I’d consider for next year,” Klien says that his main goal is finding another sportscar program.

“Sportscars are definitely where my interest is,” Klien told Speedcafe.com.

“It was a shame that Peugeot left as I had just closed a deal with them before they stopped, but you can see that it is growing for the future with Toyota joining, and Porsche arriving in 2014.

“It’s definitely where the manufacturers are moving, because it’s really top level racing that’s affordable, and they’re great to drive.”

Klien will head to Melbourne after the 12 Hour, before visiting the Clipsal 500 Adelaide next weekend.

“I’m going to go and enjoy the race in Adelaide” said Klien.

“I’m looking forward to catching up with some people that I met at the Gold Coast race. It’s a long way from Europe, so I’m making the most of the opportunity.”