International Audi swoops at half distance

International Audi swoops at half distance 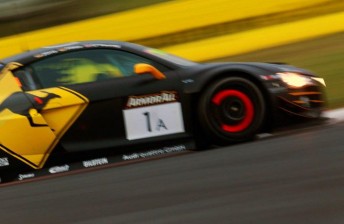 The #1 Team Pheonix Audi of Christopher Mies heads the field at the halfway mark of the 2012 Armor All Bathurst 12 Hour on a grey Mount Panorama.

The race became a battle in three during its second quarter, with the #1 Team Phoenix Audi, the #20 Erebus Racing Mercedes and the #2 Team Phoenix Audi the only three cars left on the lead lap.

Mies passed both of his nearest rivals in the final minutes of the sixth hour, as Mark Eddy fell behind Mies and Jeroen Bleekemolen after dropping 50s with an off at The Chase.

The #33 Clearwater Ferrari runs fourth, albeit two laps down on the leaders. The Malaysian entry was handed a drive-through penalty for a pitlane infringement in Hour 4, and struggled for speed in the wet conditions.

The #17 Maranello Motorsport entry also attracted a pitlane penalty in the fourth hour – dropping the early pace-setter back off the lead lap. The car would later lose more time when an electronics failure saw it stop on Mountain Straight. The car remained in the Maranello garage as the sixth hour ended, with Dominik Farnbacher having set off the car’s onboard fire extinguisher while attempting to rectify the electronic issue.

The #23 JBS Lamborghini came to grief at Hell Corner with Wayne Park at the wheel while running fourth during Hour 5. The car had been two laps down at the time after an earlier spin from Roger Lago, and a premature decision to switch to wets in Hour 3.

The Tinkler Motorsports Porsche took advantage of those issues to sneak into the top five. The Steven Richards/Steven Johnson/Nathan Tinkler trio currently holds a five lap lead over its nearest Class B competitor.

After minor showers in the third hour, torrential rain hit the circuit as the fourth hour came to a close. Bleekemolen had waged a thrilling dice with Craig Lowndes and Christer Joens while on slicks in semi-wet conditions in Hour 4, but the Phoenix Racing cars proved far superior once the weather set in.

Warren Luff and Mies pulled up to 6s per lap on Peter Hackett during the fifth hour, before a Safety Car at the 4h50m mark saw the race leader pit. Hackett took the opportunity to hand the Mercedes back to Bleekemolen when the Safety Car returned 20 minutes later, while Mies waited until the 5h30m mark before taking car #1’s fifth stop.

The race’s sixth Safety Car then saw Luff pit again at 5h40m, allowing third driver Mark Eddy to step behind the wheel for the first time. The #2 Audi’s lead was such that Eddy rejoined still ahead of Bleekemolen and Mies, before the mistake at The Chase undid his co-driver’s hard work.

Class E is being led by the #50 Racer Industries HSV VXR. The #14 Red Camel Seat Leon tops Class I despite enduring lengthy delays.

See below for the top five at the halfway mark