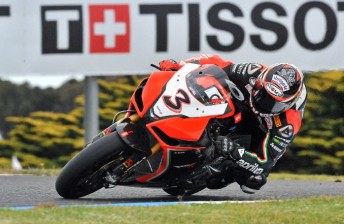 Max Biaggi has taken out the first World Superbike Championship race of the season at Phillip Island.

Carlos Checa (Althea Racing) crashed out of the race while leading, suffering a fast high-side fall on the final corner early in the race.

Spots of rain appeared at two separate stages but to no real effect for the majority of the riders and it continued as a dry race.

Here is the video of the Checa crash