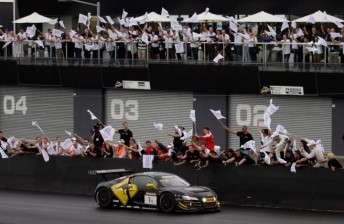 The #1 Audi controlled the second half of the race, with O’Young starring in the wet conditions as he drove four of the final six hours.

The #20 Erebus Racing Mercedes of Jeroen Bleekemolen, Tim Slade, Peter Hackett and Bret Curtis finished 1:13s behind in second place. The Mercedes proved to have better fuel and tyre economy than its rival, but could not quite match the Audi’s outright pace in either full wet or dry conditions.

The #1 Phoenix Racing entry had survived a major moment during Hour 7 when Mies dumped the race leading car into the Murray’s Corner gravel trap. The Safety Car was immediately called for the incident, allowing the German to both be extracted from the gravel and make a pitstop without losing a lap.

O’Young took over and promptly charged amid worsening track conditions, circulating up to 15s per lap faster than Curtis in the Mercedes. O’Young was able to catch and pass his rival before putting a complete lap on the American by the time Slade jumped into the Erebus entry early in Hour 8. Despite the best efforts of Slade, Hackett and Bleekemolen in the closing stints, the #1 Audi would not be headed for the remainder.

The #33 Clearwater Ferrari took third place despite not being well suited to the wet conditions. The combination of a drive through penalty for a pitlane infringement and an off-the pace stint from third driver Mok Weng Sun sent the Malaysian car a lap down early in the fifth hour. The combination of Craig Baird, Matt Griffin and a number of Safety Car periods ensured the car would hover around the leading cars all day regardless.

The race unravelled in Hour 7 for the #2 Team Phoenix Audi of Craig Lowndes, Warren Luff and Mark Eddy. In a double disaster for Audi, a major fuel spill occurred during a pitstop for the #2 car while the Mies-induced Safety Car was out. Although Eddy did not lose the lead in the incident, he was soon handed a five-minute penalty. 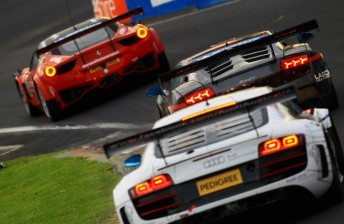 Making matters worse, Eddy spun into the pitlane entry gravel trap as he went to take the penalty, dropping four laps in the entire process. A major accident at McPhillamy Park soon after put the car out for good.

There was no shortage of carnage throughout the day, with the #22 United Autosports Audi R8 the first of the outright cars to come to grief when Frank Yu made heavy contact with the Griffins Bend concrete at the end of the third hour.

The #23 JBS Lamborghini also crashed out of the race, with Wayne Park spinning into the inside wall at Murray’s Corner during Hour 5. The car had been the first to dip below Jamie Whincup’s outright Bathurst lap record with David Russell at the wheel in the early stages, but dropped two laps after a spin from Roger Lago and a premature early move to wet tyres.

The real early pace setter had been the #17 Maranello Motorsport Ferrari, with Allan Simonsen storming past pole-sitter Mies in the early laps. The Dane repeatedly lowered the lap record during his first two stints, eventually leaving the benchmark at 2:06.33s – over two seconds quicker than the previous marker.

The Ferrari had dropped two laps at the end of the first hour however after an incorrect fuel reading saw the car run out heading up the Mountain. Simonsen was able to crawl back to the pits, but further time was lost soon after when a second pitstop was needed to reset the car’s electronics system.

While the electronics problem appeared to have been fixed, the ECU would eventually shut down during the fifth hour with Dominik Farnbacher at the wheel. Farnbacher was forced to abandon the car on Mountain Straight after inadvertently setting off the car’s onboard fire extinguisher as he tried to reset the car’s electronics.

In the class battles, the #54 Donut King Nissan GT-R of Tony Alford, Peter Leemhuis and Adam Beechey took out Class C with an impressive sixth outright.

Tenth outright and the Class D victory was a tremendous result for the #53 Boss HSV GTS of James Atkinson, Dean Lillie and Rick Newman, after the car had been crashed heavily during qualifying on Friday.

Class I went to the #14 Red Camel Seat Leon of Ivo Breukers, Henk Thijssen and Martin Bailey, despite the Dutch entry spending much of the day in its garage with engine problems.

The wet conditions seen throughout the race contributed to a total of nine Safety Car periods over 22 laps, with the final eight hours all run on wet tyres.

The highlight of the race for many had been a battle between Lowndes, Joens and Bleekemolen in the fourth hour. The trio fought over the lead of the race while on slicks in semi-wet conditions, with Joens making it to the front of the pack with an outside pass on Bleekemolen at the right-hand kink entering the chase.

A major moment for Mies at Skyline soon handed back the top spot to his team-mate however. Sadly for Lowndes, he was later suited up and ready to get back into the #2 Audi when it crashed out of the race.