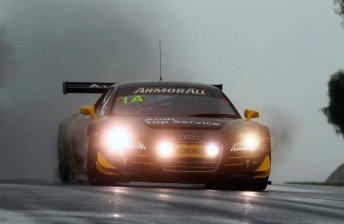 Daryl O'Young cuts through the gloom

The #1 Phoenix Racing Audi heads into the final three hours of the 2012 Armor All Bathurst 12 Hour as the only car on the lead lap.

The Darryl O’Young/Christopher Mies/Christer Joens entry leads the #20 Erebus Racing Mercedes by 1 lap and 5s despite a mistake from Mies at the start of Hour 7 that saw car #1 beached in the Murray’s Corner gravel.

The Safety Car was immediately called for the incident, allowing Mies to both be extracted from the gravel and make a pitstop without losing a lap.

O’Young took over and promptly charged through the worsening track conditions, circulating up to 15s per lap faster than Bret Curtis in the Mercedes. O’Young was able to catch and pass his rival before putting a complete lap on the American by the time Tim Slade jumped into the Erebus entry early in Hour 8.

Audi’s Craig Lowndes/Warren Luff/Mark Eddy R8 saw its chances start to unravel soon after Mies’s mistake. As Mies was being dug out of the gravel, Eddy endured a disastrous pitstop, leaving his box before the fuel hose had been disconnected.

While Eddy continued to lead after the restart, the two-time Australian GT Champion was handed a five-minute penalty for the incident, and promptly spun into the pit entry gravel trap as he came to serve it.

Car #2 lost a total of four laps in the incidents, before another crash from Eddy, this time on the run between McPhillamy Park and Skyline, spelt the end of the car’s race.

The #33 Clearwater Ferrari lies third with Matt Griffin at the wheel, after a double-stinting Craig Baird was able to get the Malaysian entry back to just one lap down on the leader.

The #3 Tinkler Motorsport Porsche 911 continues to lead Class B in fourth outright, while the #65 Motorsport Services example is one place further back in fifth.

Class E is being comfortably led by the #50 Racer Industries HSV VXR in an impressive seventh outright, while the Class I leading #14 Red Camel Seat Leon is 19th outright – a full 91 laps behind the leader.

See below for the top five order after Hour 9