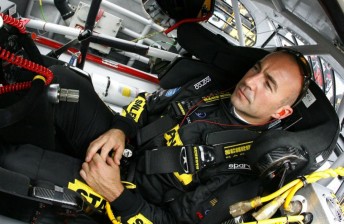 Marcos Ambrose ready to take on the 'Great American Race'

Ambrose finished the final practice session for the Daytona in eighth place, working on race set-up throughout the session.

“We have just used the final session to bed everything in – so no panic over here with the Stanley Ford,” said Ambrose.

“We’re excited about it. We have a fast car, the guys are in a good mood and with Todd Parrott (crew chief) happy at Daytona, we must be doing something right.”

Meanwhile, Danica Patriack has not been able to turn her pole position in the Drive4COPD 300 Nationwide race at Daytona into a result after heavy contact with the wall.

The race was won by James Buescher in a wild finish, after he came from 11th on the final turn to dodge spinning and crashing cars in front of him.

Patrick exited the race on Lap 49, after a hard tap from teammate Cole Whitt she lost control and hit the Turn 3 wall.

Patrick’s team pushed the car to the garage for extensive repairs, losing 48 laps in the process. She returned to the track on Lap 98 and finished 38th, an inauspicious start to a championship campaign.

Like Buescher, Brad Keselowski dodged the wreck to finish second, with Elliott Sadler coming home third in the unofficial results.