South Australian Matt Lovell has kicked off the defence of his 2011 Australian Saloon Car Series crown with three wins at Mount Panorama, Bathurst.

The Batteries Direct Ford Falcon AU led both of today’s races from start to finish.

Holden driver Simon Tabinor had been on track to take three second place finishes from the weekend before a mechanical failure resulted in a Race 3 DNF.

Nowland had failed to finish Race 1 due to power steering issues, and charged from the rear of the 31 car grid to finish 12th in the second encounter.

Michael Robinson (Holden Monaro) took out the final race for the Sports Sedans, after Stuart Inwood (Ford Falcon) was handed a 10s post-race penalty for passing under yellows. Inwood had earlier won Race 2. 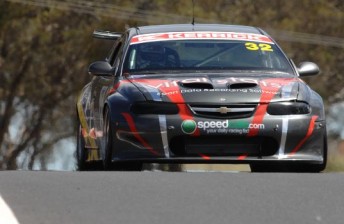 Steven Shiels charged through the field in the final to finish third after a Race 2 DNF. The Camaro Z26 had earlier been victorious on Saturday.

The Improved Production field also enjoyed a trio of races across Friday and Saturday, with Tasmanian Ray Hislop (Ford Falcon BF) proving the class of the field in all three.

Mark Ruta (Mazda 808 T) added two second place finishes to the third he took on Friday, while Ben Schoots rounded out the top three in both of today’s races.