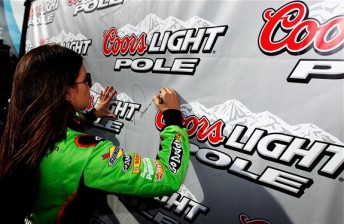 Just 24 hours after a massive accident in the first Gatorade Duel qualifying race at Daytona International Speedway, Danica Patrick has put the sport on notice winning the pole position for the Drive4COPD 300 Nationwide Series race.

The pole is Patrick’s first in 26 attempts and the first for a female driver since Shawna Robinson started on the pole at Atlanta in March 1994. Robinson is the only other woman to win a pole in any of NASCAR’s top three national series.

The 35th of 50 drivers to make a qualifying attempt, Patrick posted a lap at 182.741 mph and waited as drivers who had been faster in practice attempted to unseat her.

That didn’t happen. Dale Earnhardt Jr. couldn’t knock her off. Nor could Tony Stewart, Kyle Busch, Kurt Busch or any of the drivers who followed her in the qualifying order.

“Gosh it seemed like a hundred, didn’t it?” said Patrick.

“I didn’t even know the qualifying order. I had no idea how many people were going after me. One of the engineers was writing down lap times as he heard ’em, and he was like, ‘All right, we dodged that bullet.’

“We’ve got this one — this one’s going to be a big one. All right, we got that one.’ And I’m like, ‘It seems like every car is a big one. Of course it is — they’re all faster than me [in practice]. That’s why they’re qualifying after me.’

“I definitely didn’t know it was the pole until the last car crossed the line.”

Alongside will be last year’s Daytona 500 winner and the sport’s ‘Golden Child’ Trevor Bayne, just 0.007 of a second slower than Patrick.

“In the last 24 months, I think she’s the most improved driver we’ve had, in all three series,” said Sadler.