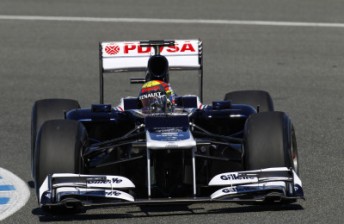 Pastor Maldonado has placed Williams on the top of the timesheets on Day 3 of official Formula One testing at Barcelona’s Circuit de Catalunya.

Maldonado posted a quickest lap of 1m 22.391s, beating the Mercedes of Micheal Schumacher by almost a second.

Jenson Button’s McLaren was fourth, with the team exploring a variety of set-ups on McLaren’s MP4-27 in the morning over shorter runs before tackling a full race simulation in the afternoon.

Daniel Ricciardo’s Toro Rosso team-mate Jean-Eric Vergne was fifth – marking the first time that the full race team was in attendance for testing.

In the sister Red Bull, Mark Webber was sixth after lapping in exactly the same time of Ferrari’s Felipe Massa in seventh.
Force India’s Paul di Resta was eighth, ahead of Marussia’s Timo Glock, who was still driving the team’s 2011-spec car.

With Lotus once again absent after chassis problems forced out of the test earlier in the week, Thursday’s final runner was Vitaly Petrov for Caterham.

The Barcelona test concludes this evening in the final day of testing ahead of the Australian Grand Prix (March 15-18).