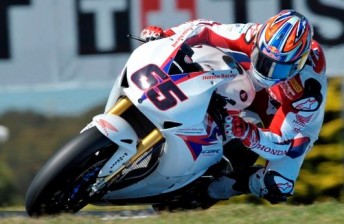 Rae beat the Ducati armada to the top spot

Factory Honda rider Jonathan Rea has upstaged the field in opening qualifying for the 2012 World Superbike Championship at Phillip Island.

Rea put in the only sub-1m32s lap in the final minutes of the day to edge out Ducati men Jakub Smrz (Liberty Racing), Davide Giugliano (Althea Racing) and Carlos Checa (Althea Racing).

Max Biaggi (Aprilia Racing) was next up in fifth place ahead the Red Devils Roma Ducati of rookie Niccolò Canepa, while the final two places on the provisional second row went to the two Kawasaki Racing Team riders, Tom Sykes and Joan Lascorz.

Bryan Staring was the fastest of the four Australians in 14th aboard his Team Pedercini Kawasaki.

Eugene Laverty (Aprilia Racing) also crashed, and was later declared fit despite suffering a blow to his head.

Leon Haslam (BMW Motorrad) returned to the track, completing three laps of the seaside circuit in order to evaluate his recent injury from his crash earlier in the week.

In Supersport, it was Australian Broc Parkes who set the pace on his Honda CBR-RR. Parkes was just 0.0026s quicker than Frenchman Jules Cluzel (PTR Honda) heading into second qualifying tomorrow.