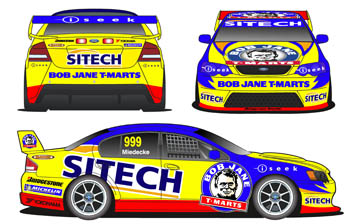 George Miedecke has revealed the look of his 2012 Dunlop Series V8 Supercar.

Miedecke, who returns to Australia after a season stint in the NASCAR-based UARA Stars Series, is setting his expectations low for the start of the year, keen to learn to ropes before

“My aim is to be at the tail end of the top group,” Miedecke told Speedcafe.com.

“You can’t deny the strength of the field. This season has to be one of the strongest fields we’ve ever seen in the Dunlop Series. The level of Main Series support is getting more and more each year.”

The Triple Eight-built car that Miedecke will drive is the same chassis that Jack Perkins steered to second place in the Development Series last year.

His entry will be supported by Sitech, Bob Jane T-Marks and iSeek Communications.

CLICK HERE for more with Miedecke in this week’s edition of Cafe Chat.