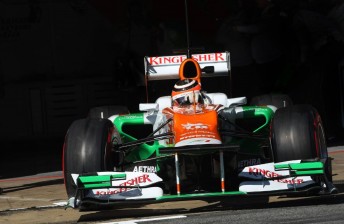 Nico Hulkenberg heads out of pitlane on the Super Soft Pirellis

The German clocked a best time of 1:22.6s late in the morning while running on Pirelli’s Super Soft compound tyre.

With Red Bull and McLaren completing extensive race simulation work in the afternoon, Hulkenberg’s time was not eclipsed.

Vettel and Hamilton found themselves in an impromptu race during the afternoon as the pair completed their long runs in close proximity – the Red Bull eventually overtaking the McLaren.

Nico Rosberg was seventh in his first official day driving the new Mercedes, while Valterri Bottas took the Williams FW33 to eighth fastest. The 22-year-old Finn will complete 15 practice sessions with the team during the season.

Vitaly Petrov (Caterham) and Charles Pic (Maurissia) rounded out the field following the withdrawal of the Lotus team from the test yesterday due to a fundamental chassis issue.

See below for the Day 2 times