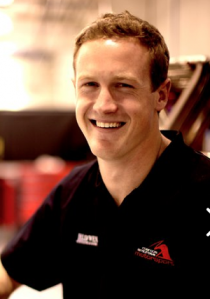 George Miedecke has been here, there and everywhere.

After competing in V8 Utes in 2010, the son of touring car stalwart Andrew Miedecke left Australian shores to try his hand in UARA Stars Series NASCAR competition with Marcos Ambrose Motorsport. He won the Rookie of the Year award.

With a season of international racing under his belt, Miedecke returns to his home land to tackle the Dunlop Series with Sonic Motor Racing.

Speedcafe.com’s Grant Rowley spoke with Miedecke about racing in V8 Supercars, his expectations for 2012 and ‘that crash’ in Targa Wrest Point earlier this year …

SPEEDCAFE: It must be nice feeling to have your first V8 Supercars drive locked in and two tests already completed?

GEORGE MIEDECKE: That’s for sure. I’m definitely starting to get more comfortable in the car. That’s a good feeling, and to go out and test amongst a lot of the main series guys and use them as benchmarks was really good.

The Sonic team always does a fantastic job, and I’m really looking forward to working (team owner) Mick Ritter and the rest of the crew. It’s a dream come true for me.

SPEEDCAFE: The Sonic team is known for its ability to groom future motor racing champions, and not only in Formula Ford, but the team has enjoyed great success in Carrera Cup and the Development V8 Series. Does that bring a little bit of pressure or expectation?

MIEDECKE: We’ll, a little bit of pressure, but they have watched me over the past two test days, and it has been a confidence builder for me that I have their full support.

Mick is known for going to race tracks with the best equipment, producing a great car and having a strong team around him. Above all else, he’s also known for not suffering fools.

As much as there’s pressure, it’s good to know that I have his backing and confidence. He’s happy with the way I’m progressing, and happy that I’m comfortable in the car.

SPEEDCAFE: You’ve got Sitech on board as a major supporter. How did that come about?

MIEDECKE: Sitech, being part of the Westrac group, have been sponsors of my dad for a few years. Being around with them, I’ve had a great time getting to know them. I’m honoured that they’ve given my their backing, and showing their faith in me.

Rodney Jane has also helped out through Bob Jane T-Marts. He is becoming to be a real supporter of young talent, so it has been essential to have him as a supporter. Jason Gommersall from iSeek Communications has also come on board too. Jason has been a long-time backer of mine and I’m incredible grateful for his on-going support.

SPEEDCAFE: What’s your expectation of the season?

MIEDECKE: You can’t deny the strength of the field. This season has to be one of the strongest fields we’ve ever seen in the Dunlop Series. The level of Main Series support is getting more and more each year.

Having said all of that, my aim is to be at the tail end of the top group.

SPEEDCAFE: Away from V8 Supercars, you competed in the Targa Wrest Point in Tasmania in January. Your rally ended early in a horrifying accident. The footage of the incident was scary. Was it as scary from the inside?

MIEDECKE: Yeah, it’s just one of those things. There was a miscommunication between myself and my co-driver. It’s what happens in those type of events.

I’ve recovered well. I still have a little bit of soreness around my shoulder, but it’s getting better all the time and I didn’t affect me during the tests in the V8. My co-driver (Daniel Willson) aggravated a back injury, but he seems to be getting better as well.

It was a scary accident, and I’m not sure if we’ll ever get the car back on track, but I will have no hesitations in going back, with Daniel, to that type of event, I love them, and those type of accidents are just part of the sport.

For vison of Miedecke’s accident in Tasmania, see the video below.