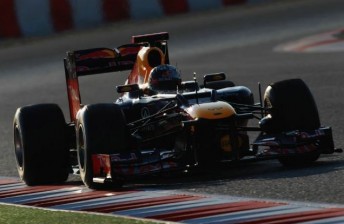 Red Bull Racing’s Sebastian Vettel has topped the time sheets at the end of the opening day of running in Barcelona, Spain.

Nico Hulkenberg (Force India) proved fastest in the early morning before Vettel moved to the top of the charts just prior to midday.

In the late afternoon, Vettel became the only man in the top seven to improve his time – a 1:23.3s lap putting the German 0.175s clear of his countryman Hulkenberg.

Schumacher later declared himself encouraged by the performance of the new Mercedes W03, despite his day being hampered by a hydraulic issue.

In even more trouble was Lotus, with the team pulling out of the entire test citing an undisclosed chassis fault that cannot be fixed at the circuit.

The team had brought its second E20 model chassis to the Barcelona test, following on from the strong form that the first one had shown at Jerez.