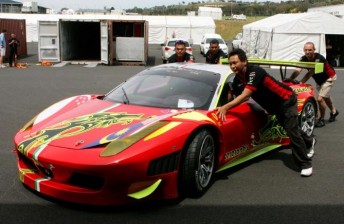 Armor All Bathurst 12 Hour competitors have begun to set-up their garages at the Mount Panorama circuit ahead of this weekend’s race.

Defending winners Audi were the first to arrive in the paddock, with the two Phoenix Racing-prepared Audi R8 LMS entries resplendent in their Australian-themed liveries.

The Australian-Germany partnership between Erebus Racing and Black Falcon is clearly also out to make an impression on the Bathurst public with four of the stunning SLS AMG GT3 cars in attendance on the mountain.

The two Black Falcon race entries are being prepared for the race in the team’s garage, while the pair of chrome Australian GT entries have been relegated to display purposes ahead of their Adelaide meeting next week.

Meanwhile, local team GWS Motorsport were active in the local community today with all three of their BMW entries literally stopping traffic with a display in front of local sponsor, Bathurst Subway.

Signs of the events growth are apparent in town with significantly increased acceptance by local media and more businesses sporting event posters and promotions in windows.

See below for Speedcafe.com’s gallery form the circuit