Block reveals more of his 2012 look

Block reveals more of his 2012 look 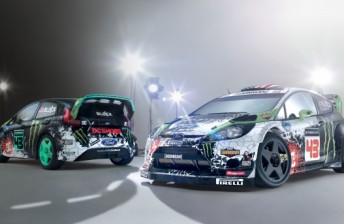 YouTube rally star Ken Block has revealed the second and final part of his launch strategy for his diverse 2012 rally activities.

“We made this second video for all of the fans who really enjoy seeing the up-close bits of racecars,” said Block.

Block will contest 19 events in 2012 including the Rally America Series, Global Rally Cross Championship, Summer X-Games, Gymkhana 5 World Tour and three outings in the World Rally Championship – starting with Rally Mexico (8-11 March) where Australia’s Chris Atkinson will be his team-mate.

Block will be part of a star-studded line-up in the Global Rally Cross Championship with two-time WRC title holder Marcus Gronholm confirming he will once again part of the series in an identically prepared Olsbergs Motor Sport Ford Fiesta.

Gronholm has been confirmed alongside British driver David Binks as part of a two-car Best Buy Racing team.

“I won some races last year, but that is not good enough,” said Gronholm.

“I have always wanted to win every time I get in a car and I have some unfinished business in the GRC.

“I have had a demanding fitness routine over the winter and I know OMSE has continued development of the Ford Fiesta. The competition has stepped up both in the Best Buy team and the field in general. I can’t wait to take Best Buy Mobile to the top of the podium.”

The GRC includes seven rounds, starting in Las Vegas in April. Two rounds are run in conjunction with X Games in Los Angeles on June 30 and July 1.