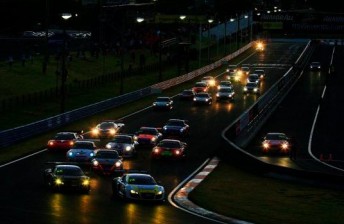 The final make-up of the 2012 Armor All Bathurst 12 Hour grid has been confirmed, with a 28 car field is set to take the start of the one-around-the-clock race after several late withdrawals.

The race has gained an entry however, with Michael Caine, Gerry Murphy and Jim Pollicina set to join the field in a Mazda RX-7.

On the driver front, reigning Auto One V8 Ute Race Series winner Chris Pither has been confirmed as the third driver for the Racer Industries HSV VXR. The Kiwi will compete alongside V8 Supercars Development Series drivers Scott Pye and Elliot Barbour.

Just one seat still remains vacant, with the third driver in Ric Shaw’s Mazda RX-7 yet to be confirmed.