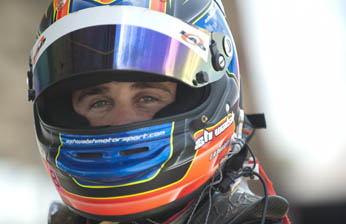 Ash Walsh will drive in the 2012 Dunlop Series, competing with Matt Stone Racing.

Walsh competed for the first part of 2011 with Miles Racing before the parties split.

The Queenslander has inked a deal to remain in a Ford, driving the Stone Brothers Racing car that Scott McLaughlin competed in last year.

Walsh will be partnered by Daniel Jilesen. CLICK HERE for Speedcafe.com’s story yesterday.

“Although Matt Stone Racing is a young team, the elements are there to really compete with the major Development V8 Series teams,” Walsh said.

“My management group undertook an extensive review of all the options for 2012. There are a lot of really good teams and, with lots of driver changes the market had opened up a bit it was really important to put a package together that we knew could deliver good results and be competitive.”

Team principal Matt Stone said that giving a young driver a chance is part of his team’s greater plans.

“Ash was on my radar and we were able to put a package together that I’m sure will start to show the potential of our team.”

Walsh’s livery and sponsor package will be revealed in Adelaide next Thursday.