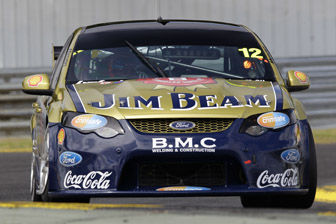 Dean Fiore in the #12 Jim Beam Racing Falcon at Sandown

The Jim Beam-backed team, run by Dick Johnson Racing, will launch its new for 2012 scheme at a media event prior to the Clipsal 500, Adelaide, next Wednesday evening.

According to the media alert, the “new livery is a total departure from the traditional Jim Beam white designs seen over the last five seasons.”

West Australian Dean Fiore will be second Jim Beam driver this year having switched to the expanded DJR squad. Fiore will retain his #12, the number attached to his Racing Entitlements Contract.

James Moffat, who drove the #18 Jim Beam car last year has switched to a Norton-branded #18 Falcon this year.

Last year, DJR launched a special silver and gold livery at the Supercheap Auto Bathurst 1000, which has remained on the cars up until last week’s pre-season test at Sandown.

The DJR/Jim Beam launch will be held on the Wednesday (February 29) of the Adelaide race meeting – a day before track action begins for the 14th running of the Clipsal 500.