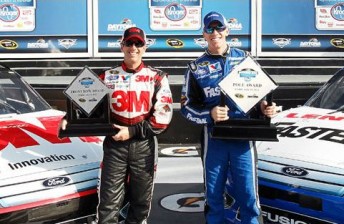 The grid order for Daytona’s Gatorade Duel races have been set following the completion of regular qualifying.

The one-at-a-time qualifying session has locked in only the first two places on the grid, while the remaining starting positions will be determined by a pair of 150 mile races on Thursday, known as the Gatorade Duels.

Pole-sitter Carl Edwards will start the first of the Duel races from pole, with fellow front-row starter and Roush Fenway team-mate Greg Biffle set to lead away the second race.

Australia’s Marcos Ambrose will race in the first Duel, where he will start on the inside of the second row.

Former IndyCar driver Danica Patrick is also in the first race having qualified 30th. On Sunday, Patrick will become just the third woman in history to start the Daytona 500.

Clint Bowyer will start from last in the second Duel after his Michael Waltrip Racing Toyota failed post-qualifying technical inspection.

With 49 cars entered for the 43-car Daytona 500, several drivers will head into the Gatorade Duels needing to race their way in.

Trevor Bayne, Tony Raines and David Stremme have all been guaranteed a start thanks to their qualifying speed, while Terry Labonte is also a certain starter courtesy of the Champion’s Provisional.

See below for the starting order for the two Gatorade Duels