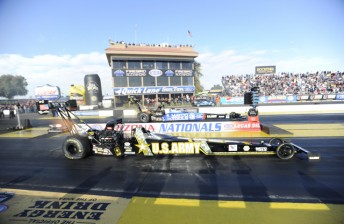 It was Brown’s 16th Top Fuel final round win, equalling his number of Pro Stock Motorcycle final round wins – with a 3.793-second pass at 319.82 mph. Being his second consecutive final round, he vaulted to the top of the points standings.

The Australian entry in the Full Throttle Top Fuel Championship – the Rapisarda Racing entry of Cory McClenathan – again qualified for the event – equalling his effort of last weekend in 13th qualifying position. He drew Winternationals winner, Spencer Massey – who duly disposed of the veteran racer in a 3.769 to 3.964 race.

Massey was knocked out by Brown in the second round.

“It’s pretty exciting two weekends in a row having all-John Force Fords in the final,” said Hight. “You have to cherish that because you know that’s not going to keep happening. It’s tough to do.”

He now moves into second in the points behind Neff, with John Force making it a trifecta of JFR Fords in the Championship points.

Defending NHRA Pro Stock Champion, Jason Line was the pick of the bunch in Pro Stock – defeating team-mate Greg Anderson in the Final. Through his pair of final appearances, Anderson retains the points lead in the Championship.

The next round is the Tire Kingdom Gatornationals at Gainesville, Florida over the weekend of March 8-11.