SuperTourers no threat to Supercars: Drivers

SuperTourers no threat to Supercars: Drivers 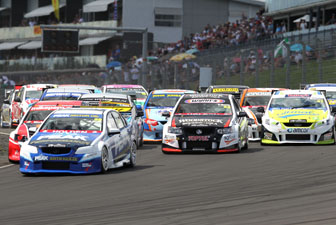 The start of Race 3 today

The encouraging debut of the V8 SuperTourers class will not make V8 Supercars redundant in New Zealand, according to leading drivers.

The inaugural V8 SuperTourers has been hailed a success, with 20,000 fans cramming into Hampton Downs this weekend.

The all-new, control class has been widely accepted in NZ, but driving stars Greg Murphy and John McIntyre agree that Australia’s home-grown V8 Supercars will remain NZ’s favourite motor racing category – despite the popular debut of the all-Kiwi V8 class.

“SuperTourers has a long way to go,” said round winner Murphy.

“We don’t have 28 cars in the field, we’re not at that level of professionalism. Just the size of what V8 Supercars is and how long it took them to get there, we can only hope to get within a stone’s throw of how professional that is.”

While team owner McIntyre agrees with that the V8 Supercars will remain New Zealand’s favourite, V8 SuperTourers is a handy back-up.

“Supercars bring over a lot more than just the specification of the cars,” McIntyre said.

“They have the star drivers and big sponsors. I think we could work really well together and pull a really big crowd, if we work together.

“I hope they still come back. It helps the top end of the motorsport scene, and there’s so many fans over here who love V8 Supercars.

“But while that’s on hold and they don’t have a race beyond this year, we’ll do our best to fill the gap.”

The second round of the V8 SuperTourers Championship will be held at Powerbuilt Raceway, Ruapuna, on April 7-8.