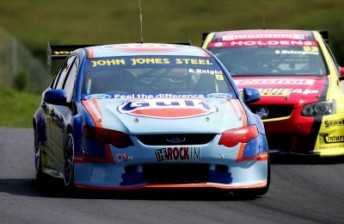 The new V8 SuperTourers Championship has fielded strong leads on new manufacturers interested in competing in the class.

After an encouraging debut race yesterday, won by Kiwi hero Greg Murphy, it has been revealed that at least two manufacturers have approached the class, genuinely interested in joining Ford and Holden in the fledgling series.

Hyundai and Kia, both who have suitably sized cars that would fit the controlled class’s model, are believed to be considering a place on the grid.

Discussions have also taken place with Nissan, who announced two weeks ago that it will join the V8 Supercars Championship in 2013, however, the Japanese giant would only consider the class if it was able to use its own engines.

Unlike the V8 Supercars Championship, entering a new manufacturer into SuperTourers would be cheaper. For a new car to be accepted, the only major cost would come in the homologation process, where the maker would need to assist in the development of the body shape to fit the standard roll cage and wheel base.

Category administrator Mark Petch says that interest in the series has been encouraging.

“We have had approaches from two other manufacturers. I won’t say that they are serious, but they are certainly inquiring about what they have to do to be involved,” Petch told Speedcafe.com.

“We aren’t hanging out for another manufacturer to come in, but we would certainly welcome them, as long as they will play on our same playing field.”

Sixteen cars are slated to start the first four rounds, with another four to join the field for the two-driver endurance races, which start in August.

Furthermore, the category will accept another four cars in 2013 before capping the field at 24.

If a new maker was to come in, Petch says that he would not expect them to join until 2013.

“The next four cars are committed – two Fords and two Holdens. Then we have a maximum of 24, which will will not deviate from,” Petch said.

“There are four slots available that could be filled by a new manufacturer. I wouldn’t like to see a single car for a new maker – it would have to be a two-car team at a minimum – but I guess that probably won’t happen until 2013 at the earliest.”

Racing continues today with a 25-lap race, followed by a 35-lap finale.