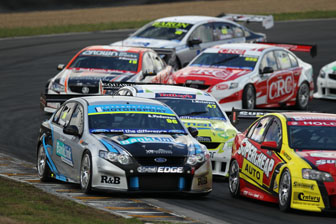 Ant Pedersen in the pack during today's final race

Ant Pedersen has secured victory in a dramatic feature race in the first round of the V8 SuperTourers class at Hampton Downs.

Pedersen took the win after two late Safety Cars bunched up the pack, turning the final 10 laps into a boxing match, rather than a motor race.

Pedersen’s International Motorsport’s team-mate Jonny Reid lead the majority of the 30 lap race, only to get swamped at the final re-start, falling to an eventual ninth.

Greg Murphy, the winner of the first two races of the weekend, was eventually handed the round win, but he had to do it the hard way.

The local hero was forced to serve a drive-through penalty for collecting the back of Kayne Scott on Lap 12. Murphy fought back into contention but was eliminated on the second last lap after a tap from Andy Booth.

Provisional results sees Murphy take the round win from Scott and Reid.

Booth crossed the line fifth, but was handed a 40 second penalty (drive through equivalent) after late contact with Murphy.

Championship points after Round 1