Murphy again as SuperTourers get physical

Murphy again as SuperTourers get physical 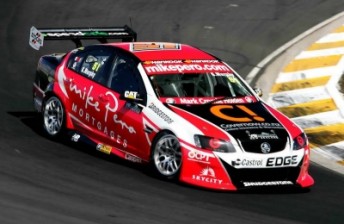 Greg Murphy has taken his second win for the weekend, scoring victory in Race 2 of the inaugural V8 SuperTourers round at Hampton Downs today.

The race was highlighted by a number of incidents, including a clash between Craig Baird and Ant Pedersen, a wild mid-pack spin from Scott McLaughlin and a lot more panel rubbing.

From pole position, home-town hero Murphy made a shocking start, dropping as low as third before carving his way into the lead.

Murphy’s victory was greeted by a huge response from the strong crowd on hand at the south Auckland circuit.

“It’s great to see everyone here again,” Murphy said to the crowd after the race.

“Kayne made a great start, I’ll have to learn from them. Hopefully this afternoon we can have another good race.”

After a relatively quiet start to the race, things got physical after a Lap 6 Safety Car, due to debris on the circuit.

At the re-start, Murphy tried an inside move on Scott. It was unsuccessful, but he would only have to wait another lap to get the job done at the same point of the circuit.

Reid, fourth at the re-start, moved past Booth to third, but when he tried his luck at an outside move on Scott around the outside of Turn 1 on Lap 14, he lost his place to Booth.

Reid, an Australian Carrera Cup driver, used his superior pace to eventually get past the pair again, taking second place.

Scott, Booth and Bell remained line astern in third, fourth and fifth, while behind them, there was action.

Baird collected Pedersen at ‘The Dipper’. The contact dropped Pedersen out of contention and Baird out of the race due to steering damage. Baird copped a drive-through penalty for the incident but did not take it die to the damage.

McLaughlin was caught in a spun at Turn 3 bingle, narrowly avoided by the pack.

See below for results from Race 2.