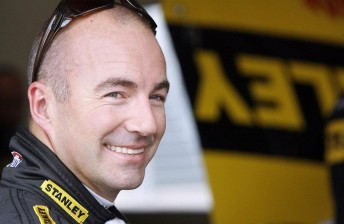 Australia’s Marcos Ambrose has finished third in the kick-off event to the NASCAR Sprint Cup season – the non-championship Budweiser Shootout at Daytona.

Ambrose led the field coming to the final lap, but was overhauled in a two-car train by Tony Stewart and Kyle Busch.

Busch, the driver they call ‘Wild Thing’ jumped out to pass ‘Smoke’ in the final metres to grab the victory.

“We’ve got a lot of steam under the hood this week, which is great. The Ford department has done a wonderful job with the engines.

“I’m out there driving the Stanley car with one lap to go thinking I’m gonna win the race and I get freight trained. There’s a lot to learn out there. 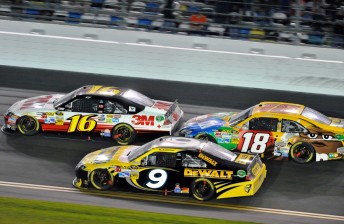 Ambrose on the inside of Greg Biffle (front) and Kyle Busch

The next big crash occurred on lap #58 when Ambrose tapped Joey Logano after having Martin Truex Jr pushing from behind. Taken out in the wreck were Dale Earnhardt Jr, Matt Kenseth and Kevin Harvick.

Finally, with drivers jostling for position coming to the final lap, Jeff Gordon ended upside down after he got together with Kyle Busch. Also in the crash were Jimmie Johnson, Kurt Busch, A.J. Allmendinger and Jamie McMurray amongst others.

This meant the race was decided by a green-white-chequered finish – with a final two-lap dash to the flag.

Ambrose re-started in second place behind defending Sprint Cup Champion Stewart, but with Brad Keselowski in-behind he headed the field coming to the final official lap of the race. However, the Kyle Bush-Stewart freight train steamed around the outside into the lead. Ambrose did claw back some ground to finish just two lengths back at the finish.

Check out the Green-White-Chequered finish