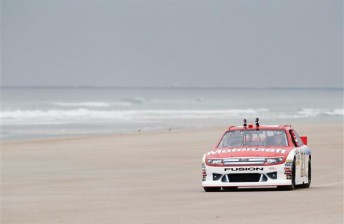 Trevor Bayne, the defending champion of the Daytona 500, officially kicked off NASCAR’s portion of Daytona Speedweeks by driving the No. 21 Motorcraft/Quick Lane Ford Fusion along the old beach course en route to Daytona International Speedway.

NASCAR’s origins date back to races on the famous stretch of white sand when the course features a run along the beachfront prior to the speedway’s opening in 1959.

It is the first time that such an opening to the Daytona 500 Speedweeks has been held and is set to become a ‘new’ tradition.

“This is probably the coolest thing I’ve got to do outside of actually racing on other tracks,” said Bayne.

“As a racecar driver you watch races of the beaches and I wish we could come back here and get the groove all rutted up and try to miss the potholes, but this is an unbelievable feeling – being on the beach where it all started. This is history right here.

“It would be one thing to drive a street car down this beach, but to be in the 21 car and sitting here I feel like I’m a part of history and that’s pretty cool.”

On hand were car owners Eddie and Len Wood, the son of Glen Wood who raced on the beach, and along with brother Leonard is still active in the Wood Brothers operation today. 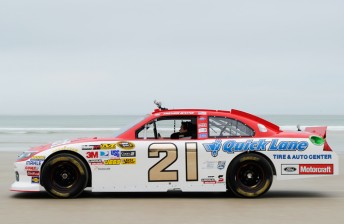 Trevor Bayne on the beachside at Daytona

“I think racing on the beach is probably the one thing that our dad is most proud of,” said Eddie Wood.

“He actually sat on the pole here the last race they had in sportsman and I think he wound up finishing third overall and won his division, but we’ve got a picture like that in our shop of him leading the race, but it’s an honour to be here. I’m really a big believer in history and tradition, so this is about the coolest thing I’ve ever done, besides the Daytona 500 last year.”

Len Wood spoke about how different it would have been racing on beach sand and the sealed road section that linked each end of the course.

“It would be different,” said Len Wood.

“Dad talked about how he would touch the brakes when he was going down the asphalt side to make sure you had brakes at the other end, and up here he could swing it in and the sand would kind of dig in and help slow him down, but he was quite proud of the fact that he ran here six or seven years and never wrecked. He finished every race and he was quite proud of that.”

Check out the video from Ford Racing on the event