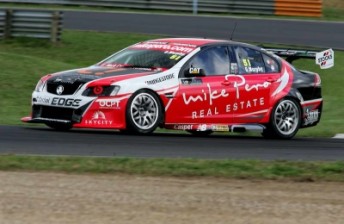 Greg Murphy has won the first-ever V8 SuperTourers race, coming from behind to score victory at Hampton Downs.

The four-times Bathurst 1000 winner and New Zealand legend made a sluggish start and dropped to as low as third in the opening corners before picking his way up to the front, scoring his first win in a motor race since his V8 Supercars win at Surfers Paradise in 2005.

“It’s fantastic,” Murphy said as soon as he hoped out of his Mike Pero Holden Commodore.

“It’s awesome to be in New Zealand and racing – and winning is not bad either.”

Murphy and pole-sitter Kayne Scott were forced to follow the fast starting Andy Booth, who moved into the lead at the start and remained there for the first 13 laps.

Murphy tried an outside move on Booth at the hairpin on Lap 12. That attempt failed, but an aggressive pass stuck at Turn 1 on Lap 13.

Once in front, Murphy was not touched.

While Murphy scooted into the distance, Booth was left to fend off Scott and Jonny Reid. Scott made his move at Turn 1 on Lap 15, while Reid was unable to make an impression on the former New Zealand Grand Prix winner.

Reid ended up fourth, the first of the Falcons, from fellow Ford driver Craig Baird.

Scott McLaughlin was involved in a Lap 1 incident that saw him turned around at the hairpin. He dropped to the tail of the field, climbing up to 10th place.